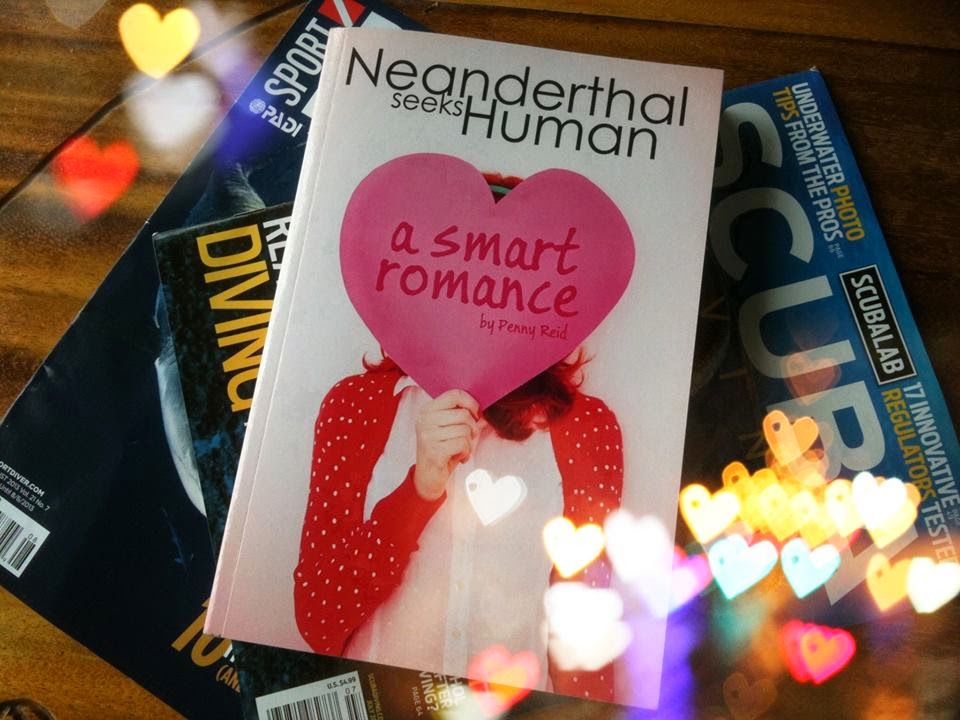 (photo courtesy Penny Reid’s website)
Ginger: This is our FIRST Spank and Ginger Show Book Review and Giveaway, and we’ve chosen Neanderthal Seeks Human (Knitting in the City #1) by Penny Reid, to be our first.
Spank: So that means Quinn Sullivan is popping our cherry.
Ginger: Yes… Sir Handsome McHotpants is popping our blog cherry.

“There are three things you need to know about Janie Morris: 1) She is incapable of engaging in a conversation without volunteering TMTI (Too Much Trivial Information), especially when she is unnerved, 2) No one unnerves her more than Quinn Sullivan, and 3) She doesn’t know how to knit.
After losing her boyfriend, apartment, and job in the same day, Janie Morris can’t help wondering what new torment fate has in store. To her utter mortification, Quinn Sullivan- aka Sir McHotpants- witnesses it all then keeps turning up like a pair of shoes you lust after but can’t afford. The last thing she expects is for Quinn- the focus of her slightly, albeit harmless, stalkerish tendencies- to make her an offer she can’t refuse.”
I’m genuinely excited that this is the first book we are reviewing and I think I may actually love the female protagonist character more than Sir McHotpants.

Ginger: I agree. I absolutely LOVE Janie! Her ability to spout off random trivia whenever she is feeling socially awkward makes me feel a special kinship for her.  Speaking of, did you know that two weeks ago was “National Moth Week” and that moths are a major food source for people in some nations?  Why do moths need their own National Week? Why can’t bunnies or kitties have their own National Week? Why must it be moths?
Spank: It’s really more of a week long celebration of their life, given that the life span of a silkworm moth is about one week. Yucca moths have even less cause for celebration as they die within two days.
Ginger: See? This is why we are best friends, and why we both connected with Janie’s character so much.
One of the other things I love about Janie…her core support group of friends are in her weekly knitting group, but she doesn’t knit!
Like that time in college, where I was a member of the Caribbean Students Association even though I am an Amish/Mennonite-Pennsylvania Dutch redhead from Orlando. 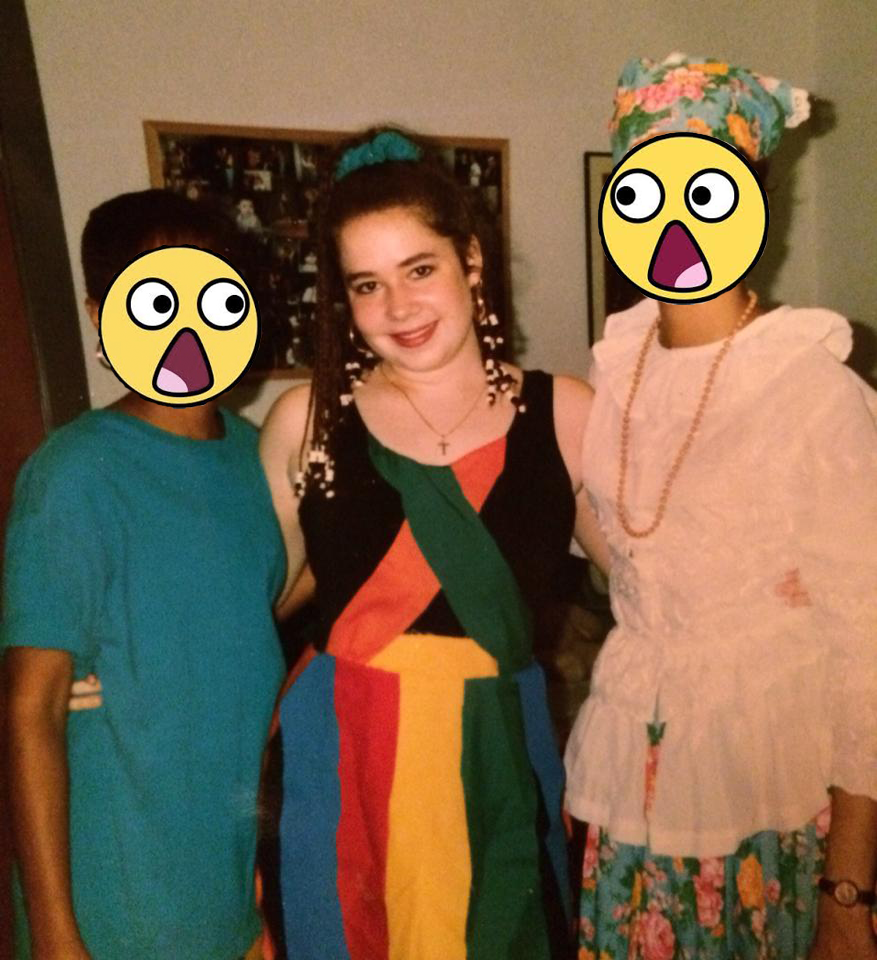 Ginger: Now that I think about it, that was pretty random of me to be in a club like that.

Spank: Everything about you is random.

Ginger: True.
Spank: Back to topic… Some of my most favorite moments in this book were spending time with this incredibly diverse group of smart and funny women from all backgrounds who are supportive, loving and encouraging of one another.  It was a refreshing change of pace from so many romance novels that focus only on the mating rituals of the main characters.
Ginger: Absolutely! Janie’s core group of friends in her knitting group was far more realistic to those of us with tight, supportive core groups where a love for each other trumps women who just want to scheme and connive to try to win the affection of the male love interest.
Spank: The most conniving, backhanded aspect of the book involved a secondary character with minimal impact.  And that’s the point.  The story didn’t need any drama to move it along.  It was refreshing as I’m tiring of the stories that are supposedly based in reality but are entirely unrealistic.
Ginger: Exactly. The character development was so complete, you didn’t need the extra angst or drama that so many other stories contain, and I loved that about the book.  Janie is so smart, yet so socially awkward, she immediately gained my support.  And there are so many quotable moments in the book. If I were to state them all, I’d have to quote the entire book.  But I must include just a couple…
I love when she finds out the name of Quinn and reminds herself to call him by his name…
“Quinn. His name is Quinn. I must remember to call him Quinn, not Sir Handsome McHotpants”
And how about when she sees the bathtub in his master bedroom for the first time?
“My eyes widened when I saw the tub. It was an impressive tub; I don’t think I’ll ever quite get over the sight of that tub and the images it conjured of taking a bath with seventeen of my closest friends. I literally could have held knit-night in the tub.
Quinn seemed to sense I needed some time to absorb the enormity of the tub, so he waited for me in the master bedroom. When I emerged, I gave the tub one last longing look then turned my attention to Quinn.
Tub plus Quinn equaled Quinntub or Tubinn. I decided Tubinn sounded more alluring; I let that thought wash over me: Tubinn with Quinn.
I didn’t even try to fight the blush that followed.”
Spank: And how can you not love a female character with a deep love of superheroes, has a Wonder Woman apron and calls out “By the mighty power of Thor!” as an means of amplifying a point?  If that quote was a fortune cookie, all you need to say is “in bed” and you have an erotic novel.
Ginger: Thor does have mighty power in his hammer.  *wiggles eyebrows*  Janie’s love of superheroes and comic books only further endeared her to me.
Speaking of, I’ve got to share another one of my favorite parts of the book, where Quinn and Janie are talking:

“What are you doing tonight?”

“I didn’t know you knit.” He lifted his eyebrows.

“Yes, well, Susan B. Anthony laid the foundation for those who would come after her. It’s all really interrelated, but she didn’t have direct influence over late twentieth-century comics.”I’m telling you, I’ve read this particular book three times and it just never gets old. And can we talk about the author, Penny Reid? I remember reading this book when it first came out and loving it so much I tweeted her about it.  She was so nice and down to earth that I have continued a tweeting relationship with her ever since. (is that even considered a relationship or is that more like stalking?) Doesn’t matter. I love her. Any author that dedicates a book to her computer, the software developers responsible for spellcheck, and all 3 of her readers, is golden.
Spank: I adore Penny Reid. We have been Twitter tight for well over a year. She is so engaging and kind to all of her readers.  She’s also affable, has an easy sense of humor, and is ridiculously smart.  I mean, the woman writes federal grants for a living! The only grant I can write is “Grant Ward” from Marvel Agents of S.H.I.E.L.D.
Ginger: This book is so enjoyable and the writing is so smart, I just know you all will love it too. That is, if you like enjoyable, smartly written romantic comedies.

Spank: While we did not discuss Quinn Sullivan in much depth, I can assure you that he is a super hot and amazingly well-written, panty dropping hot man worthy to be called any woman’s book boyfriend. But the draw, for me, to this story was Janie and how she relates to the world and those she loves — be it her friends, family coworkers or Quinn.  If I did not already have a best friend with natural red hair, Janie would totally be my top choice.

Ginger: I agree. We didn’t talk much about Sir Handsome McHotpants, but he is totally book boyfriend-worthy. 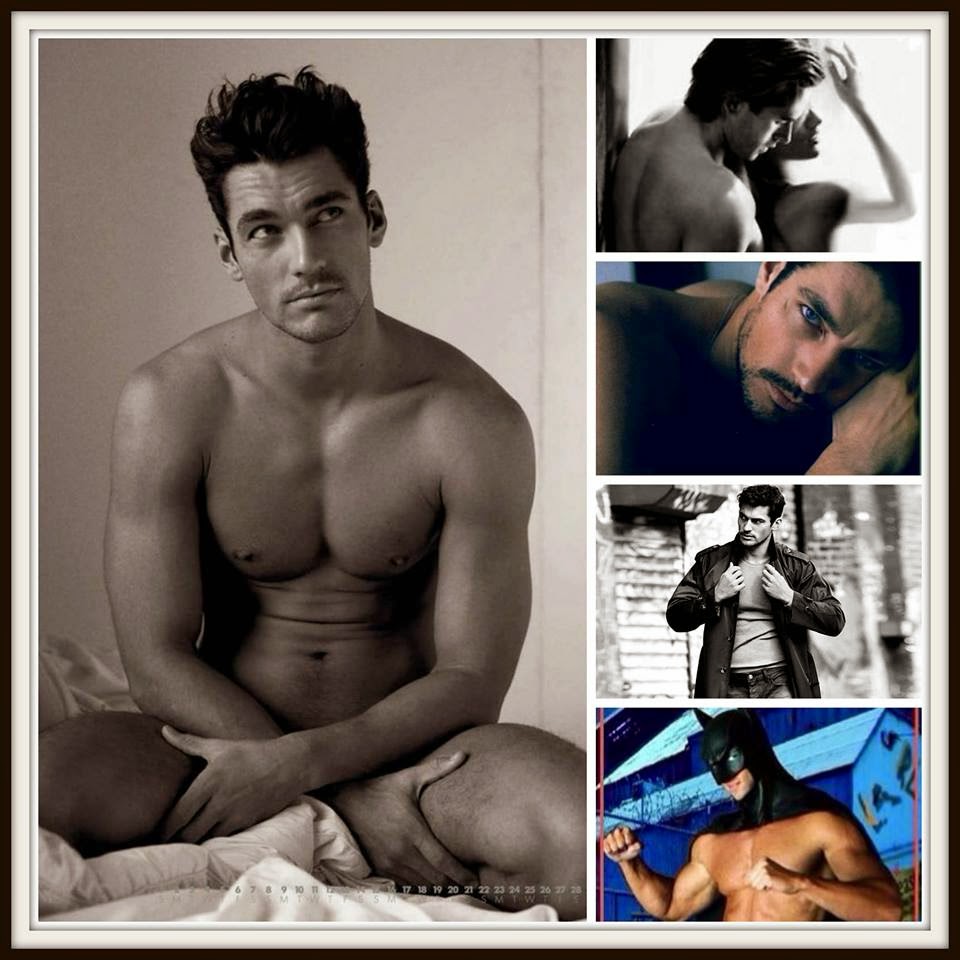 
Ginger: Absolutely!  So let’s get to our ratings… I give Neanderthal Seeks Human….

Thank you Penny for not including the no-no hole in your love scenes and therefore allowing me to keep your ratings all clean thumbs.

Ginger: And we want to wish Penny Reid a very Happy Belated Birthday!  (since it was yesterday)
Instead of getting her a gift, she is giving US a gift by offering… an autographed copy of Neanderthal Seeks Human and a NSH mug to one lucky winner of our giveaway! 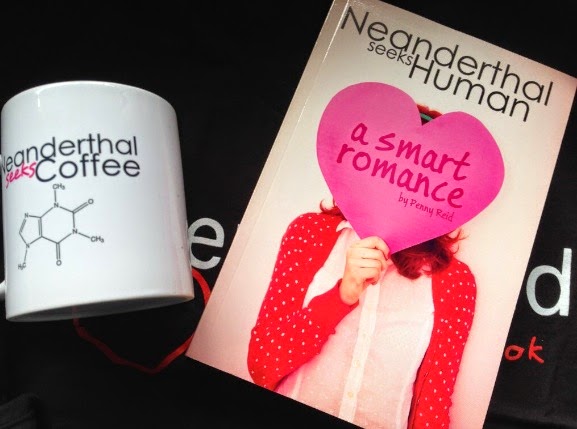 Spank: I really hope I win the mug!!!
Ginger: I want the mug too, but I think we should save the mug for our readers.
Spank: I am a reader.
Ginger: Good point. *writes note to remind myself to enter our names in the giveaway while no one is looking*

Spank: BUT WAIT! THERE’S MORE!  Ginger and I are also giving away TWO copies of Neanderthal Seeks Human (kindle or book format).

Ginger: That’s right! And we are giving each of you a chance to earn up to FOUR entries in our giveaway.  Here’s how this will work:  If you want your name submitted 4 times in the giveaway…
1. Leave your name in a comment.
2. “Like” us on Facebook. (click the FB icon on our sidebar to go to our FB page, then click “Like”.)
3. Share our Giveaway on FB or Twitter.
4. Subscribe to our blog. (either by email or RSS… also on our sidebar)
So… when you leave your comment, tell us which of those 4 you have completed and we will enter your name that amount of times for the giveaway.
Example Comment: Janie Morris- “I’ve liked your FB page, and am sharing this on Twitter. (3 entries)” You don’t actually have to tell us you are leaving a comment. The act of leaving a comment pretty much speaks for itself.
(sorry, this giveaway is for the Continental U.S. only)

You have until Thursday midnight (Eastern Standard Time) to enter. Winners will be announced on Friday.

And PLEASE don’t forget to check back on Friday to see if your name is announced as a winner for one of the three drawings!
Good Luck!